How a publishing company used their intranet to create and share COVID-19 information.

The COVID-19 pandemic created an insatiable demand for news and information for people around the world. It also created a new working dynamic as many employees were forced to work remotely or in a hybrid environment. This sparked a surge in intranet software, as organizations, like Hachette, aimed to provide employees with a single source of information.

Hachette Book Group (HBG) is one of the largest trade publishers in the US, and a division of Hachette Livre, the world’s third-largest book publisher for the general public and educational markets. Based in New York, Hachette employs over 1300 people across eight locations.

Hachette’s intranet journey began approximately five years ago with a custom-built Python application using the Django framework. But like many in-house built intranets, it had its limitations and frustrations. “It was becoming increasingly more challenging to allocate technical resources to its development and maintenance,” said Ryan Pugatch, VP, Strategic Technology, Hachette Book Group.

Ryan and his team began searching for a new solution. “We needed a solution that was easier to use and allowed  everyone to maintain content rather than relying solely on our internal communications team.”

The team investigated numerous other intranet solutions, but eventually selected ThoughtFarmer due to its ease of use and intuitive interface. Hachette was also excited that ThoughtFarmer has a professional services team that could guide them in reinventing and launching their intranet.

“I would describe our roll-out as flawless. Our deployment of ThoughtFarmer was one of those rare IT projects where the technology worked as expected and the project was delivered on-time and on budget.” 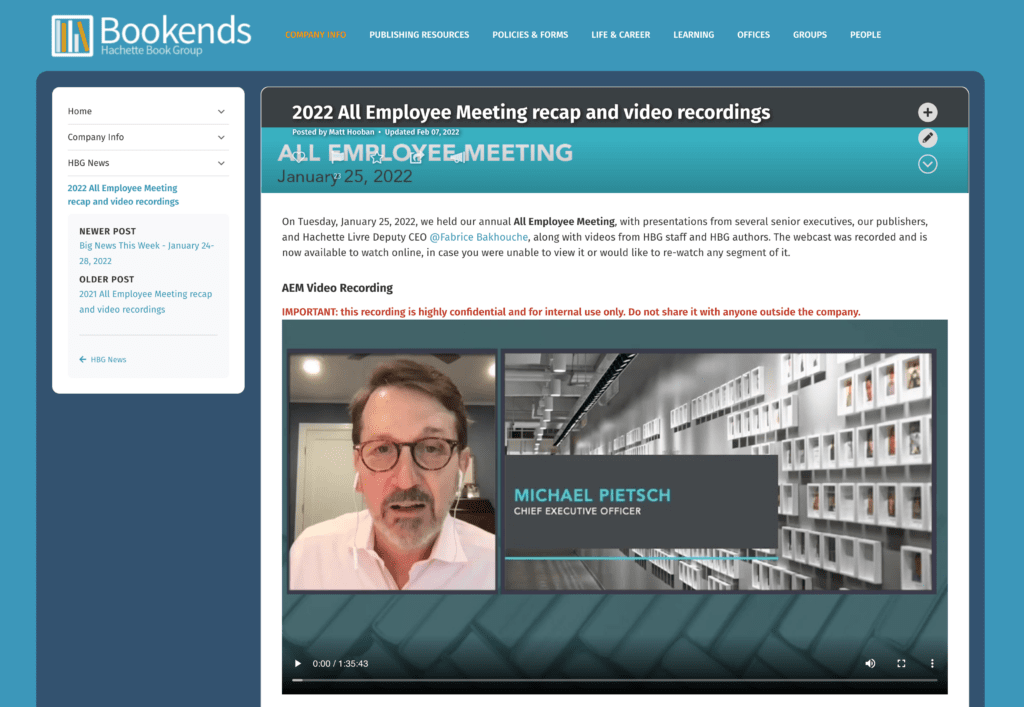 While adoption of intranet software can be challenging, Hachette had many factors working for them. First, their employees already understood the benefit of an intranet. “Our adoption effort initially benefited from people’s existing habit of referring to the intranet as a single source of news and information, and the vast improvements to the overall experience that came with the move to the ThoughtFarmer platform,” said Ryan.

Second, intranet adoption was aided by executive buy-in, as well as an internal marketing campaign that included emails, and placement on the internal visual messaging system. As stakeholder adoption grew, the success of the intranet continued to spread.

And finally, adoption increased dramatically over the last twelve months due to the COVID-19 pandemic. “Adoption was propelled significantly by the pandemic, and the resulting need for people to find news, information, guidance, and resources in a single spot as they transitioned to working outside the office,” said Ryan. Hachette also saw increased response to their CEO posts—especially video. Not too surprising, as leadership involvement on an intranet is one of the best ways organizations can maintain and achieve intranet engagement.

A single source of truth

At the onset of the pandemic, Hachette’s intranet became a valuable tool—one that allowed the publishing company to quickly create and share detailed information, and maintain a strong sense of community and connectedness throughout the entire company.

Hachette devoted a section on their homepage for all COVID-19 updates — a popular tactic among ThoughtFarmer users — which employees came to rely on for up-to-date news information. 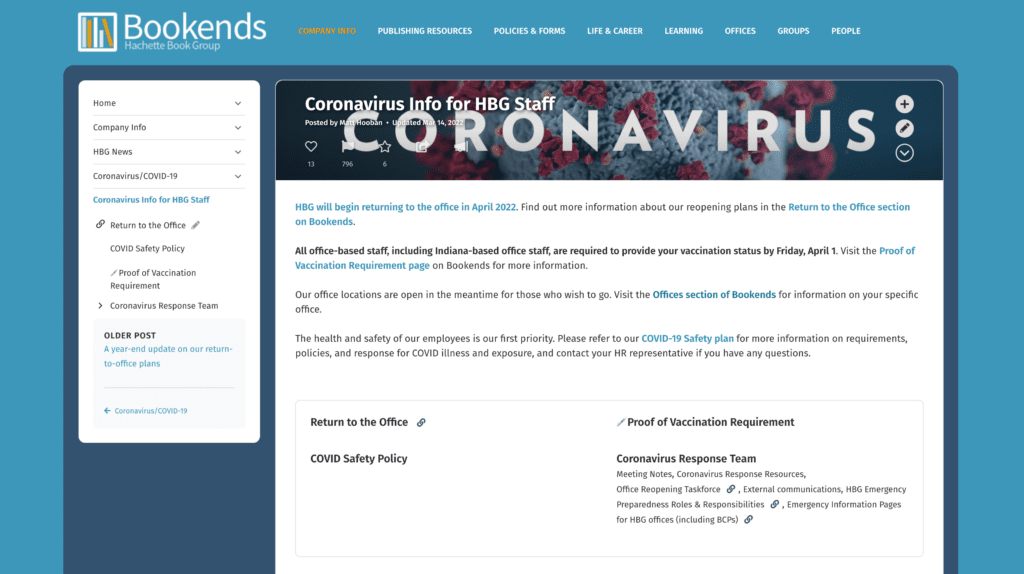 The publishing company also turned to their intranet to unite their employees and grow their workplace culture. “We adapted our homepage photo carousel (a modified use of the news feed feature) to display working from home selfies that collected throughout 2020,” said Ryan. The team at Hachette even took it one step further and created a photo gallery of ‘working from home shelfies’, which were images of employee bookshelves (we love the creativity of a publishing company!).

Hachette also created a series of discussion groups surrounding employee topics such as crafting projects, cooking suggestions, playlists. This was managed through the Forums feature which allows organizations to capture great ideas with dedicated discussion forums.

At its core, an intranet is an internal communications tool, and Hachette relies on it to disseminate important information to employees. “We make use of the News Feed feature to power news distribution to specific groups and the entire company,” said Ryan. “Sharing news and resources can be done instantly, which has allowed us to expand both the breadth and depth of the content we’ve been able to produce.”

With the pandemic creating a dispersed and remote workforce, employees need a way to surface documents and expertise. One of the greatest strengths of ThoughtFarmer is its search functionality, and the ‘Best Bets’ feature has been a huge success for Hachette: “Best Bets has been helpful in refining and targeting searches for specific terms,” said Ryan. 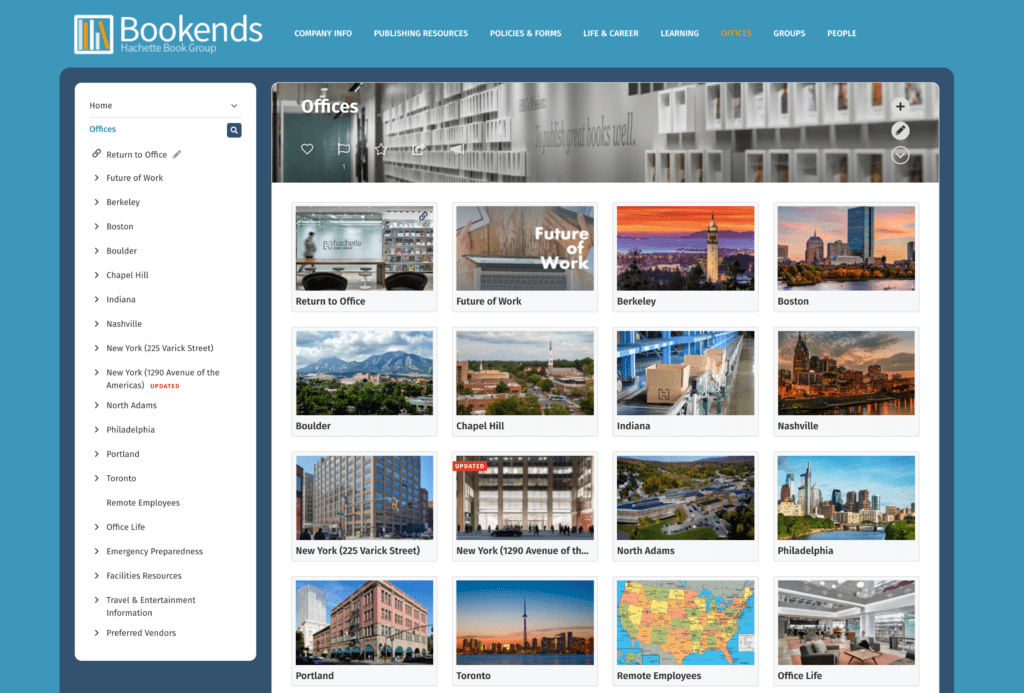 With pandemic communication well under control, the team at Hachette is now looking to empower additional content creators. “Our goals going forward are to identify additional contributors in the organization and create opportunities for them to share and showcase news and information,” said Ryan. “We also plan to work more with groups who are still heavily reliant on email, PDF, and other less efficient means of information sharing to demonstrate the benefits of using the intranet to share their work.”

Ryan added, “ThoughtFarmer has revolutionized internal communications at our company by giving us a powerful, versatile platform that is easy to use and open to contributions from throughout the company.”