How Capital Region BOCES found the intranet of their dreams

Imagine the perfect intranet. You know, the one where every employee knows who everyone is, what their responsibilities are, and what projects they're working on. An intranet that is so amazing members of your organization praise you just for launching it.

Then imagine the overwhelming, daunting feeling that comes over you as you realize just how far away that dream actually is.

Capital Region BOCES started out with great aspirations as they began their intranet journey back in 2015. The vision was clear, they knew the end goal. They just didn’t expect the journey would be as long or chaotic as it became.

Fortunately, their patience and persistence paid off, and Capital Region BOCES ended up with an intranet that exceeded their wildest expectations. How?

Let’s start from the beginning

Capital Region BOCES is a non-profit educational agency that helps school districts access high-quality services at an affordable cost. With approximately 1,200 employees, they offer over 300 different services, operate schools of their own that serve students with disabilities, and provide career and technical education.

When we think about all the reasons an organization might require an intranet, Capital Region BOCES pretty much checked every box.

With no centralized online document storage, important information was frequently kept on the public-facing website. This was particularly problematic for staff who needed to access essential resources and required quick access to relevant documents to adhere to strict regulatory requirements.

It’s not easy for employees to feel connected to each other in an organization as large and diverse as Capital Region BOCES. More than 1,000 employees are spread across six divisions, 11 BOCES-owned buildings and 150 school districts statewide. This made it almost impossible for employees to know each other, let alone know what everyone was working on. This dispersal also made it challenging for employees to effectively connect and collaborate with each other.

With no other collaboration tool in place, employees were forced to communicate solely through email. This meant that messages were easily lost or important people were inadvertently left out of critical discussions.

Because information was scattered across various networks and computers, employees had no simple way of storing and sharing important information. This lack of knowledge share meant duplicated work and wasted time as they searched for documents.

All of these challenges prevented Capital Region BOCES from providing staff with easy access to the tools they need to do their jobs and a means by which to collaborate and connect.

If we build it, will they come?

Because Capital Region BOCES was already well-aware of all the collaboration and communication challenges within their organization, they knew what they needed from an intranet. So much so, that they began the process of building an intranet from scratch.

With the help of a few brave souls from Communications and IT, as well as an external developer, Capital Region BOCES built their intranet with SharePoint. After a considerable amount of time (and patience!), they thought they had finally achieved the intranet of their dreams.

Unfortunately, it wasn’t that simple.

The limitations of SharePoint

As their intranet team quickly discovered, SharePoint might be great in some scenarios (they still rely on it for other projects), it just wasn’t ideal for their scenario.

Their SharePoint intranet didn’t work for a few reasons:

Realizing that SharePoint wasn’t the answer to their problems, they abandoned the intranet site altogether before launching it to all employees.

The ordeal was frustrating and heartbreaking. But the passionate team at BOCES wasn’t ready to give up just yet. They knew that a SharePoint alternative would solve organizational problems, and those problems were too costly to ignore. They believed that the ideal intranet was out there somewhere, and they weren’t going to stop until they found it.

The intranet team began researching intranet vendors and came across ThoughtFarmer's SharePoint alternative early in their search. They were immediately impressed.

“ThoughtFarmer understood our needs right away, and it was obvious their platform would solve many organizational problems,” said Nicole Graf, communications specialist for Capital Region BOCES.

After a few attempts at creating the perfect intranet, the team at Capital Region BOCES was finally feeling optimistic again.

“It was as if we had been wandering in the desert for 10 long years and now finally found our tribe hanging out at this chill social intranet oasis asking, ‘What took you so long?’” said former Director of Communications, Deb Bush-Suflita.

But would it work?

It was now time to launch their new intranet, but first, they needed to give it a name. The team decided on BERT, which stands for BOCES Employee Resource Tool.

Nicole and her team were understandably hesitant to roll-out yet another intranet. “We had a history of failed attempts, so another one would have been rough. Plus, we really wanted to rebuild trust and didn’t want to let staff down,” said Nicole.

The previous experiences gave the Capital Region BOCES team the insight they needed to approach a roll-out more strategically than they had in the past.

“We knew our 10-month instructional staff didn’t have as much access to computers as our 12-month administrative staff did, therefore wouldn’t adopt as quickly,” said Nicole.

A training session was held to walk staff through how to share ideas on their new intranet as well as how to get their questions answered online. To ensure swift adoption, leadership encouraged employees to visit BERT for all essential information, including division-specific forms, documents, and updates, making it clear they would only be available in BERT. 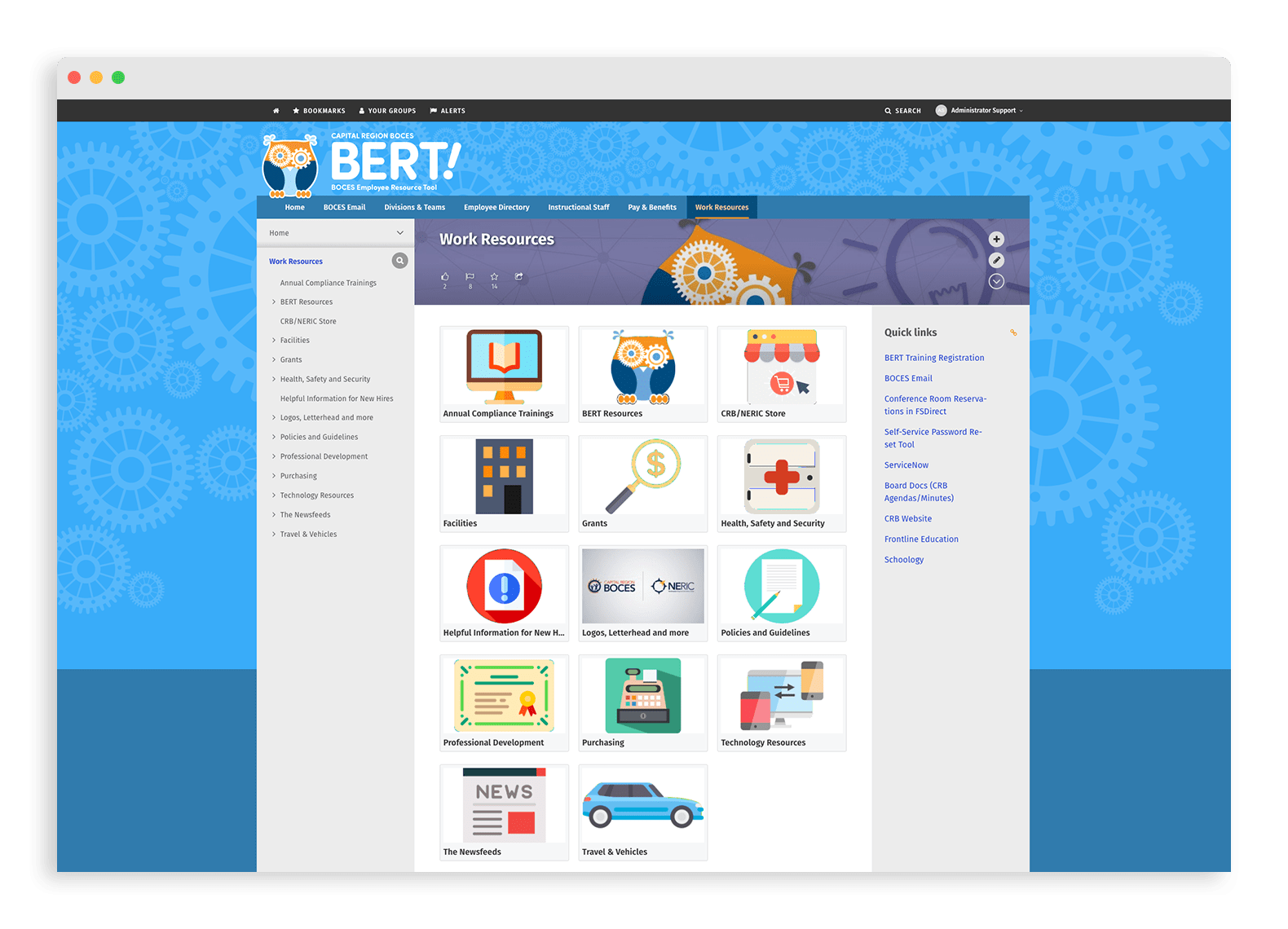 Since deploying ThoughtFarmer, a SharePoint alternative, there has been a tremendous increase in connection among employees. Employees now have a place to share important news, events, and congratulatory and farewell messages. Best of all, they know who they’re communicating with, which has made collaboration across dispersed staff a lot more meaningful.

Because of the analytics available within ThoughtFarmer, BOCES is able to measure the results of their efforts. In less than a year they realized gains that far exceeded their expectations.

Nearly 400 employees completed a 12-question baseline survey over a two and a half week period in June 2016, prior to the new intranet site launch. Employees were then polled five months later following the launch of BERT, where they were asked questions that related specifically to their new intranet. In meeting these targets, the number of employees who said they “agree” or “strongly agree” with a series of statements increased.

The site has become an integral resource for bringing staff together around their organizational objectives.

“ThoughtFarmer has been perfect for us, as was the guidance that came with it. The features, ease-of-use, and help with including staff in the whole process were very important to our success,” said Nicole. 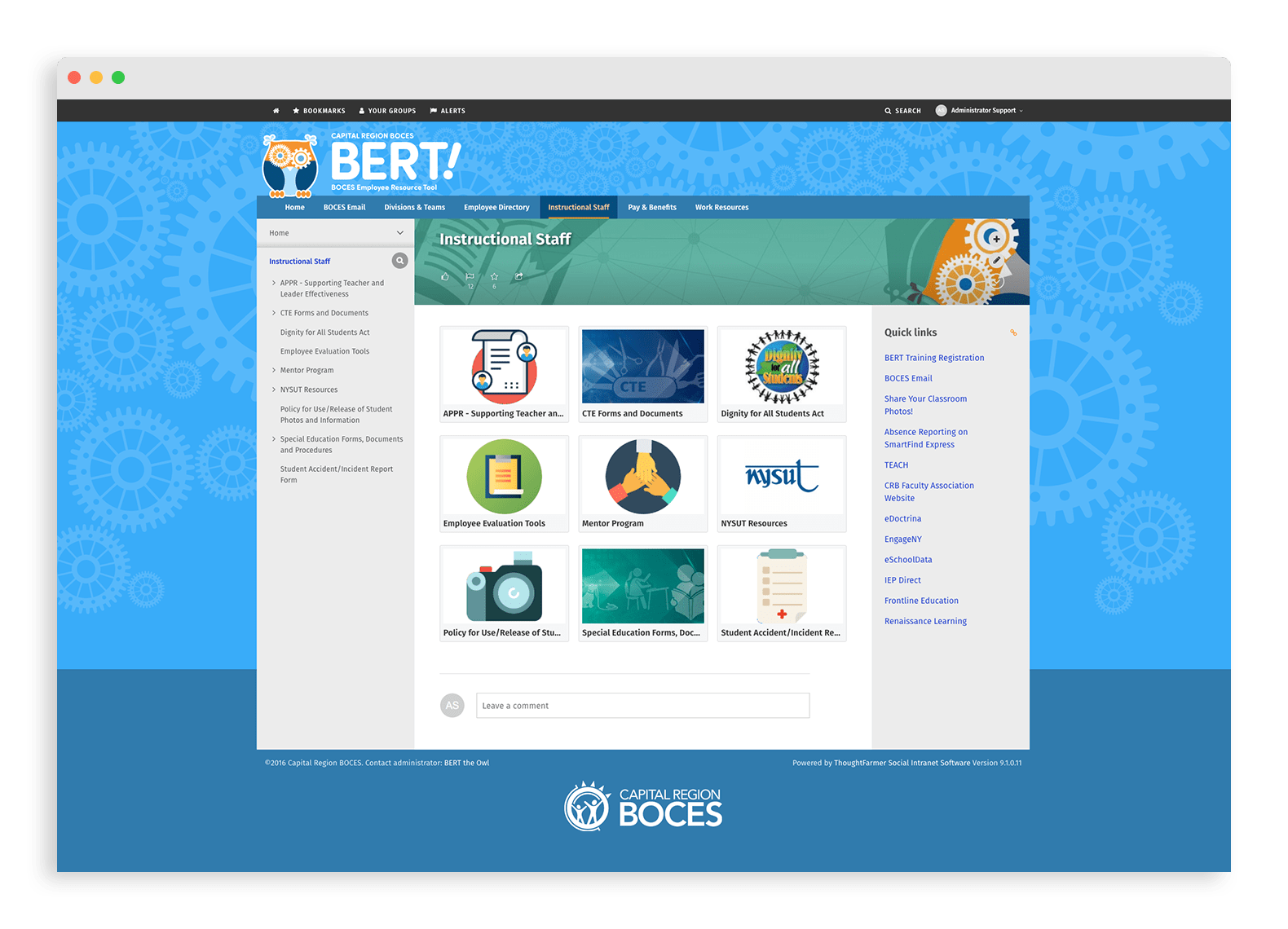 Now that BERT is up and running Nicole can shift her focus to strategic initiatives.

“A goal of mine for our team is to become more knowledgeable on internal communications practices rather than focus on maintaining the tool. We’ve got a very good handle on BERT now and I want us to use it as effectively as possible to improve employee engagement and collaboration.”

Nicole also looks forward to the new features that are continually available from ThoughtFarmer.

“I like that [ThoughtFarmer] is always evolving. We are also very excited about the FormFlow feature and will continue to strive to improve organizational processes,” said Nicole. “Just like it says on ThoughtFarmer’s website, our new intranet truly does ‘make work better.’”