But in addition to project-specific work, Continuum also engages with clients to help them build the culture and internal structures needed to foster innovation within their own organizations. Continuum calls it organizational innovation.

ThoughtFarmer, which Continuum deployed in early 2010 to build a vibrant new intranet, dubbed “Orange”, has become a vital tool in the firm’s own culture of innovation. And it’s one that Chief Operating Officer Chris Michaud believes can help foster and spread creativity in any organization.

“Many of our clients are working hard to create more innovative organizations,” Michaud says. “In our collaborations, a key area we always discuss is how they support the connection of people, knowledge and ideas.”

“A strong intranet, one that is part professional content and part social media, helps to bring people together. It helps to make the right connections across silos, across continents. This is the beauty of a tool like ThoughtFarmer.”

ThoughtFarmer is social intranet software that integrates traditional intranet functions with social networking features such as wikis, blogs and tagging. It enables organizations to share knowledge, engage with employees and foster collaboration.

A key pre-requisite for organizational innovation, it believes, is a willingness to embrace failure – not just the possibility but the almost certainty of at least initial failure.

“Innovation,” Michaud says, “is fundamentally a risky business. You can’t be innovative without failing. Rather than worry about failing, learn to embrace failure. Learn to fail faster. To fail early in the process. To fail forward. Quickly prototype your best ideas, test them, and figure out how to make them better.”

Companies like Continuum that know this don’t just accept failure, they actively encourage it, or at least they encourage the risk-taking behaviors that lead both to innovation and, inevitably, sometimes, failure.

To create a culture in which this is possible, in which people feel secure about failing in front of their peers, requires “a high degree of trust,” Michaud says. “And trust comes from personal connections and connectivity.”

Social media and knowledge sharing tools, Michaud believes, can amplify not only the geographic range of trust-inspiring personal connections, but also the number. Research has shown that most people can manage connections with a maximum of about 150 other individuals, 200 tops.

“We look at platforms such as ThoughtFarmer as a way to extend that, to push the boundaries,” he says.

Many heads are better than one

Another central tenet in Continuum’s theory of innovation: two or more brilliant minds are always better than one at coming up with successful solutions to design and innovation challenges. Better still if the brilliant minds come from disparate backgrounds, with different points of view.

“As we work with clients to help create more innovative organizations, some of the questions we want to explore include – what we can do to bring disparate thinkers together, what can we do to foster trust. Do people have a high degree of autonomy? Are they self-directed? Some of these things can definitely be supported and enhanced by a platform like ThoughtFarmer,” Michaud says.

How does ThoughtFarmer enhance organizational innovation at Continuum?

One way is by making it easy for employees to set up interest groups – which everyone in the organization can easily do. Continuum uses ThoughtFarmer as a completely open platform, a platform that is “self-directed” by nearly 200 employees who are dispersed around the world.

About 140 groups have sprung up so far, some based on shared personal passions, some on practice areas or professional disciplines. This is an explosion from the 20 or so in the old system, points out Ryan Gruss, Continuum’s digital asset manager and resident intranet guru.

Participation in the groups helps employees make connections across geographies, which helps build trust, Michaud says. The groups are also forums that bring disparate thinkers together and build new knowledge.

Continuum’s emerging markets group, for example, is an important one because a third of the firm’s business is in this area. It didn’t have an online forum before. Now it does and is able for the first time to tap into the knowledge of people everywhere in the firm – like the Russian-born, Shanghai-based employee who can contribute valuable personal insights from her work and life experiences.

“Since ThoughtFarmer came online, more people have been able to access the knowledge residing in individuals, but also the contribution to that knowledge has grown in some really wonderful ways,” Michaud says. “And that means we’re better at doing our client work.”

Anyone can post anything anywhere on Orange. “Some folks ask us, ’How can you do that? Don’t you worry that someone is going to post something inappropriate?’” Michaud says. “To this, we say, ‘Don’t you trust the people you work with?’ At Continuum, we hire really smart, really passionate people with great judgement. And we trust each other.”

“One of our main goals,” Gruss says of the design process, “was to keep the system wide open. Any employee in the company is allowed to, and encouraged to publish directly to the front page. This wasn’t feasible with the old system.”

Inspiring others: the idea machine

Mark Zeh, a senior consultant responsible for pan-European relations, currently working on establishing a presence for Continuum in Germany, uses the feature to both promote what he’s doing to the rest of the firm and, he hopes, inspire others.

One recent post included annotated photos taken on a trip to Milan, illustrating innovative uses of vending machines – for storing visitors’ umbrellas at the Palazzo Reale on the city’s main square, and catering to consumers’ after-hours pharmacy needs. “I thought they were clever,” he says. 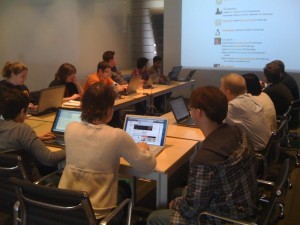 Knowledge and idea sharing also create a contagious sense of excitement. “One of the great things about working for a company like this is that it’s fun to work here,” Zeh says. “And what makes it fun is when you know about the exciting things that are coming.”

Building buzz about what Continuum is doing has more practical benefits too. Zeh’s “Fresh Squeezed” items about his meetings with important client prospects – often posted the same day, accompanied by visuals – help him promote what he’s doing in Europe to the rest of the firm.

ThoughtFarmer is also helping marketing manager Emily Paisner get exposure for Continuum’s achievements outside the firm.

Seeing the forest, harvesting the trees

Orange for the first time provides her with an overview of “all the amazing things this organization is doing,” including noteworthy ideas and innovations that in the past might have slipped from view as busy designers and strategists moved on to the next challenge.

Neither had immediate application in firm projects so far as Zeh knows, but the item, properly tagged in ThoughtFarmer, might well provide inspiration for a designer who goes looking for ideas in the future. It’s often the way innovative designers and marketers
work, he says. It’s about constantly increasing your source of inspiration and making the right connections.

“With most inventions, you’re not really creating something fresh, you’re transferring technology or ideas from something already existing and using them in cool new ways.”

It’s helping Paisner identify opportunities to promote employees as thought leaders and experts. Even if they can’t immediately go on the record about what they’re doing, she can flag items she sees on the intranet and go back later when they can talk.
“A lot of the new opportunities we’ve identified we never would have heard of before ThoughtFarmer,” Paisner says.

At the same time, through her own pages and posts, she’s advertising her marketing successes – and that is spurring employees to participate more in external marketing. It becomes a competitive thing, Paisner says. “They want the same kind of recognition.”

Continuum started looking for a new intranet software platform in mid-2009. It had reached a critical stage in its evolution, having grown in the past decade from a small, mainly U.S.-based operation to a global force. It now has over 200 employees (up from 100 at the turn of the millennium) spread across five offices on three continents – Boston, Los Angeles, Milan, Seoul, Shanghai.

“The bigger you get, the more difficult it is for everyone to know what everybody else is doing,” Michaud says. “The challenge of knowledge sharing across a global company located in different time zones with more than 200 people meant we needed a more robust platform than the wiki we developed in-house nearly 10 years ago.”

The firm looked at what was available, set up test environments using some of the contending products, and eventually narrowed it down to two: ThoughtFarmer and a more expensive system from a much larger company.

“ThoughtFarmer just seemed to fit the way we worked better,” says Gruss, who headed the search committee. “A lot of it came down to the user interface. It’s very inviting for people to add content. Some of the other tools had every bell and whistle you could imagine, but they were confusing.”

The product’s visual bias – the ability to scroll and pan through graphical representations of content, display search results visually and easily add video and image content – was another key factor.

“As a creative company, we have a lot of visual thinkers,” Michaud says. “Having information presented this way makes it much easier for us to engage with it.”

At the same time, Continuum liked that ThoughtFarmer intranets are logically and hierarchically structured – and liked even more that it could easily change the structure as its priorities shifted. “It wasn’t so simple to do with our [old system],” Michaud says. "Basically it meant going in and doing a lot of recoding.”

ThoughtFarmer’s “nimbleness” was a crucial part of the fit for Continuum. “Our internal organization is in constant shift,” he says. “We need tools that can easily shift with us.”

Intranet in a flash

That nimbleness also enabled a very fast implementation, which appealed to Continuum – even if it didn’t at first believe how quickly the system could be up and running.

“Chris McGrath [of ThoughtFarmer] told us it would take five days, and he was true to his word,” Gruss says. “On Monday, we started with an empty server, by Friday the system was up and the entire company was trained and ready to start adding content.”

And now that most employees are incorporating Orange into their daily routines – 135,000 page views and 35,000 visits after less than five months – is it possible to calculate a return on the modest investment in ThoughtFarmer?

“We think it’s an investment in our people more than an ROI play,” Michaud says. “It’s a tool that helps to strengthen our connective tissue, even as we grow.”